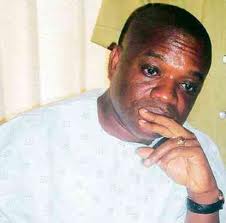 Mr. Orji is also the chairman of First International Bank Limited. He also owns Daily Sun a Nigerian newspaper which has a daily circulation of over 130,000 copies as at June 2014.

This is a consortium of companies with business interests spread all over West Africa. The company has interests in real estate, oil, finance, media and publishing, insurance and tourism among others.

Daily Sun newspaper is part of SLOK Holding as the major arm of their media and publishing segment.

During the Obasanjo era SLOK airline owned by the former governor of Abia state Orji Uzor Kalu was suspended, since then it has halted its activities in Nigeria.

Today, the airline is the major air carrier in the Gambia, and has other offices in Ivory Coast, Ghana, Senegal, Sierra Leone, Guinea and Liberia. According to reports Slok Airline now gives world-class flight services; this has culminated over the years to the success story of the airline across Africa.

During his tenure as as Governor of Abia state, Orji obtained a degree in Abia State University. Just last, middle 2013 the degree was put in doubt as reports emerged that he was not properly admitted into the University, rather he used his power as then governor to obtain it. This was further confirmed by the University and the certificate was withdrawn. What followed was a public outcry, questioning the university’s intergrity.

Behind every successful man there is always a woman behind, pushing him to greatness. But such women are not spared the backlash that hits there man, as Kalu’s mother has learnt, Eunice kalu a.k.a Odiuko na mba, was said to be the one who introduced Kalu to a cult, which helped him win elections protect him from his enemies. It was rumored that she was responsible for the poor state of health of Orji Kalu’s wife which seemingly lead to madness or crazyness as the case maybe.

“A Nigerian woman, Chinwe Masi, 47, on August 19 died in the United States home of Ex-Abia governor, Orji Uzor Kalu. Chinwe died from suspected internal organ failure that may have been triggered by ingestion of alcohol. She suffered from high blood pressure according to friends.

Chinwe, formerly married to one Okechukwu Ogbonna, reportedly arrived the ex-governor’s home at 14900 River Road, Potomac, Maryland at 8.30 pm on the fateful day, Thursday, August 19. According to sources, she had gone to deliver cologne purchased by the ex-governor at her shop during a previous U.S. visit in June this year. There were four other Nigerians at the ex-governor’s home at the time of Chinwe’s arrival. Chinwe was offered a bottle of Guinness stout upon her request and 15 minutes later started shouting “my chest, my chest” vomiting blood. The ex-governor immediately picked up the phone and called paramedics and police, both arriving the scene in minutes. Paramedics were on their way carrying her into the ambulance when she died.”