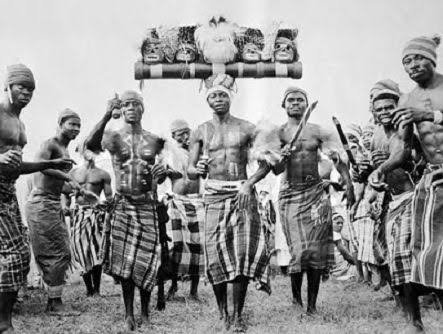 The Ngwa tribe is the largest tribe in South-eastern Nigeria. It is believed that the word “Ngwa” is coined from the word “Ngwa Ngwa” which means quickly.

The Ngwas can be found in an area that shares boundaries with Owerri and Mbaise on the west, Ikot-Ekpene and Abak on the east, Ukwa on the south, and Umuahia on the north.

This tribe is settled in an area in old Aba. They have a population of about a million people and occupy an area of 2,300km square. The people of Ngwa are majorly farmers. A very few women from this tribe take part in Akwete cloth weaving.

It is believed that the Ngwa people are cannibals. Although a lot of people are yet to drop such belief, there are no proofs. The Ngwa people feed on “Akpu” (processed cassava) and Ukazi soup. They are predominantly Christians and dress like other Igbo tribes. The women tie two wrappers on blouses while the men tie wrappers and put on regular shirts.

Ohafia is a local government area in Abia state, it is also one of the tribes in this state. The Ohafia people were known to be mighty warriors in pre-colonial days. Their history is one identity that they seem to be very proud of. Up till today, they still have the warrior’s cap and young men from this tribe still wear it around.

People in Ohafia speak Igbo. They are predominantly farmers and Christians.

Their mode of dressing is not so different from that of other Igbo tribes. Their men tie wrappers under a traditionally made top. This attire is incomplete without a cap. Ohafia women tie two wrappers on a blouse.

In the past, Ohafia men were known to be mercenaries of war. However, in more recent times, the farm and trade. Also, processed Cassava and soup are known to be the major food of people from this region.

Abiriba is one of the tribes in Abia state. It is located in Ohafia local government area. Just like the Ohafia tribe, people from Abiriba were known to be warriors in ancient times. Upon arriving in the area which they now occupy, the war skills of this tribe facilitated their settlement.

The Abiribas share some similarities to some non-Igbo tribes in Cross Rivers state. Myth has it that they migrated from somewhere in Cross Rivers and then settled in Abia.

People from Abiriba have plantain porridge as a staple and dress like other Igbo tribes. Their men put on shirts on wrappers, while the women wear two wrappers over a blouse.

They are mostly farmers. Also, Christianity is the dominant religion of this tribe.

The Aros is a tribe that can be found in the modern-day Arochukwu Local government areas. They are people of mixed origin, dialect, and culture. They bear a lot of similarities with a non-Igbo tribe called Ibibio. Although they speak the Igbo language, their dialect is a little difficult to understand by the average Igbo. The Aros has a very rich cultural heritage. They are known for their Ekpe society, a cult group that was very dominant in pre-independence Aro.
Present-day Aros are predominantly Christians and farmers. They are known for wearing George and feed on processed cassava and soup that is very rich in fish and assorted bush meats.

The people of Ohuhu do not possess a very rich cultural heritage, they are predominantly traders and Christians. This tribe is not different from other Igbo tribes in its mode of dressing as well as its food.

Entire Anambra state and beyond are under NRI clans except for Onitsha which migrates from Obi-aruku clans to NRI clans.

Obosi lands belong to NRI clans, while Obosi is one that welcomes Onitsha Aloni and gave him a large space to live.
Ogbaru, Ndoni, and his brothers belong to Obi-aruku clans, today Ogbaru is in Anambra state while Ndoni is in Rivers state.

Mbaise is the geopolitical amalgamation of five originally independent clans namely; Abgaja, Ahiara, Ekwereazu, Ezinihitte, and Oke-Uvuru, located between latitude 5 to 60 North and Longitude 7 to 7.50 East and covering a mass area of about 500 square kilometers. Mbaise culture is rich in music and Igbo dance. Music is played on the wood xylophone, hand piano, long-short, and slit drums, pots, gongs, bamboo horn, and calabash. There are dances for childbirth, marriage, funerals, communal labor, and other social occasions.

This is the Igbo clan that’s located right in Imo State capital. They are known for their love of entertainment and merriment. With a popular soup known as ofe Owerri.

Many people in Enugu State are from Nri, they share the same ancestry with the great Nri clans except Nsukka, which is its own clan and has its own local government.

You will see many sub-Igbo groups and clans in Ebony state but the major one is Abakaliki.

The anioma Igbo clan can be found in Delta north senatorial zone.