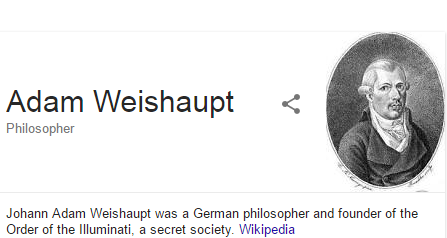 I believe it’s high time we establish whether illuminati is really existing in Africa, whether they are the dangerous blood suckers that most people believe them to be. Whether some celeb in Africa and beyond are really in this exclusive group where money and fame are yours for the taking.

What then is Illuminati

The Illuminati has its roots in Bavaria (cut. Germany) and was founded by Adam Weishaupt on May 1 1776. Original founded to oppose the dominance of the Roman Catholic, oppose superstition, prejudice, religious influence over public life, abuses of state power, and to support women’s education and gender equality it soon grew and became popular which made the Bavaria government to outlaw it.
Illuminati is a name given or adopted by groups of people or fraternities in most cases secret societies; they are made up of individuals with the same ideology and the same believes like the Sea lords and Pirate confraternity in Nigeria  of cults in Nigeria They have come to together to agree on the same main objective and agree on how to accomplish it, with each member charged to make the

“inner doings” or practices secret, “to keep what is secret secret”.

Though there’s no Bavaria-style Illuminiti movement existing today, but many groups now lay claim to it, especially the various Fraternities in America, they use the same name with some viration, as some now call themselves “the Illuminati order” or other names like “Illuminati Trianvirate.”It has grown and as they grew their objectives and aims grew too and in most cases they’ve diverted from the early Bavaria Illuminit aims and objectives to now accommodate the ever increasing need for modern day luxuries like flashy cars, money and houses. The Fraternities that now call themselves Illuminati leverages on this wants to attract members offering them power and fame which usually are their silent motto.
Though there are many groups claiming Illuminati today however there is no evidence that these present-day groups have amassed significant political power or influence, and they promote unsubstantiated links to the Bavarian Illuminati as a means of attracting membership instead of trying to remain secret. And as such they are not really Illuminati as the early Illuminat watchword is secrecy.

Some notable African movie and music celebs were at one time assocciated with the Illuminati movement some media outlets went as far as labeling them members without giving concrete evidence.

Such celebs include Nigeria’s singing sensation P.Square and D’banji where (P.Square) they claimed that they used their mother as sacrifice following Akon’s deal with the duo after he signed them on to Konvicts music after which Akon introduced them to Illuminiti (he being a member himself). To enter they were asked to give his mother as a price for an entry into the exclusive group. When asked the duo of Peter and Paul Okoye denied ever doing such a thing challenging those behind that to come forward with evidence. Again no evidence was brought forth and thus the case was partly closed, though it’s being carried about albeit not like before.

Another one to be labeled an Illuminati is Kenyan’s Raila odingaa former Prime Minister whose meteoric rise to power is one of a fast fire bridged approach. Rumour have it that the then presidential candidate Mr. Raila Odinga has to join Illuminati in other to be stronger than the president Uhuru Kenyatta and also win the presidential seat, one significant story of this rumour is during the election day Uhuru Kenyatta knew he was going to lose to counter it he sent political thugs charged with making Odinga to change his mind about becoming president, Uhuru went on to tell them “if he won’t concede kill him.” On arriving there the thugs bulldozed their way in saw Odinga, they then tried to talk in out of running he refused, they brought out their guns shot Raila Odinga on the chest and boom! Mr. Odinga vanished into thin air!!

Illuminati is real and also it’s a fiction, is real because there was actually a group called Illuminati, not real especially in Africa as such stories that are affiliated with that group lacks evidence, like a Judge will say “a case have merit when it has enough evidence without evidence there is no case.”

update : A new facebook group have just been launched for people who are interested in joining the order, you’ll have a better chance of being spotted here is the group Yet To Be Illuminati

6 thoughts on “Illuminati In Africa Fact Or Fiction?”