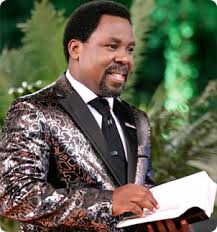 TB Joshua also Attempted To Bribe Me- South African Journalist Claims.
Following journalist Nicholas Ibekwe‘s
explosive tape on which a man alleged to be Prophet Joshua is heard offering N50,000 bribe to journalists to write favorable stories about him, a renowned South African investigative journalist, Jacques Pauw has now come forward with claims that Joshua tried to bribe him. Pauw says Joshua gave him and his camera crew thick envelopes full of hundred dollar notes. They had been at Joshua’s Synagogue Church Of All Nations to produce a TV documentary featuring the Prophet and his miraculous healing of terminally South Africans.

Pauws alleges the “brown envelopes” were to ensure a positive programme was produced.
Read excerpts about his alleged bribery account

it’s a long read I was making a TV documentary and my challenge to Joshua was straightforward: allow me to film how you heal Basson (a 25 year old Springbok rugby player who was dying of liver cancer and went to Prophet TB Joshua for healing). If you succeed, I promise I will show it to the world.
When we arrived at Joshua’s compound, the TV team and I were in effect incarcerated. For two weeks, we were forbidden to leave the grounds.
We were told we could not drink or smoke, and had to attend services and events with the pilgrims. While I stayed in a dormitory with other pilgrims, Basson and his mother set up camp in a private room.
The church took away the young man’s morphine and pain pills. During our first interview, a softly spoken, affable Joshua said it would be easy to heal Wium because he had nothing but a “little sore” on his liver.
At Sunday sermons, the afflicted lined up with placards stating what condition they needed healed.
There were lines of people seeking a cure for HIV/Aids, ­cancer and heart conditions, business failures, wandering spouses and dull brains. A festive, almost joyous atmosphere filled the compound as churchgoers sang, clapped and danced. Evil spirits were cast out and those set free by the Prophet writhed in the dirt while vomiting out the demons.
Joshua prayed for every person in the line and declared them all healed. He ordered them to stop using any medication and trust in God. Among the pilgrims was Capetonian John Rindel, who was suffering from full-blown AIDS and already had dementia. He had arrived at the church several weeks before we did, was prayed for by Joshua and declared completely healed.
He had stopped taking his medicine and showed remarkable improvement. Scientists refer to this as the “placebo effect” of faith healing.

A patient can experience genuine pain relief and other ­symptomatic alleviation after being prayed for.
The relief is short-lived and the patient soon returns to his original condition. On my request, Rindel agreed to go for two independent HIV/Aids tests when he returned to South Africa. Both showed he was still positive. He died a short while later. The BBC recently investigated the London branch of the church and reported that three women had died after being “healed” and told to stop taking their HIV/Aids medication.

I challenged the pilgrims to provide me with medical proof that they had been healed. None did. Ruben Kruger died in 2010 just before his 40th birthday.

And Wium Basson? Joshua never prayed for him. He said God had not sent him a message to do so. The young man left the church broken, disillusioned and at death’s door. He died a few days after returning to South Africa.

Before I left the church, Joshua handed me, and the camera and sound people, thick envelopes full of hundred dollar notes. He wanted to be sure we’d produce a positive programme.

We gave the envelopes back. A year or so after the programme aired – and generated a massive response from people who called us accusing Joshua of all sorts of misdeeds – the preacher produced a video of a 76-year-old South African man named Moses he said he’d brought back from the dead.

Moses was among a group of South African pilgrims in Lagos when he had a heart attack in the dining room. Videos distributed around the world showed three pilgrims, one a doctor from Bloemfontein, trying to resuscitate Moses.

They failed, the videos reported, and Moses was carried into another room. Joshua walked in, bent over him and ­commanded: “In the name of Jesus, rise!” Moses opened his eyes. It later emerged that Moses had been both alive and ­breathing when he was carried from the dining hall. He’d been resuscitated, not resurrected, and clever editing created a fake miracle.

I understand the despair of terminally ill people and why they grasp at final straws. My father died of lung cancer and might well have made the journey to Lagos. I am just glad he is not here any more to become a victim of a ravenous tick that feasts on the blood of the ignorant, ­gullible and desperate.