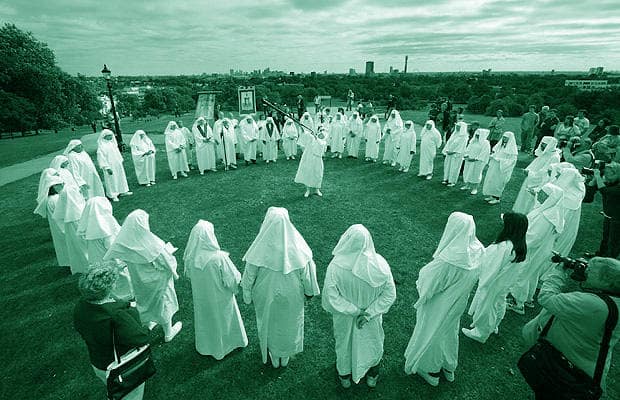 The cult world is a reconstructed world. It is invented to run subterranean, below the real world and purveying a different ideology. A new identity shrouds the old one. Is there a binding cord between Rugged Satan, Wined Wizard, Viprous Angel and the real persons? Is there a transference of spirit? Similarly, the sense of community is symbolized with distinctive colors and dress coder.

How to recognize cults in Africa and The World

The Black Axemen appear officially in black trouser, black beret, black shoes and stockings, black waist band and white short. The black lords spot yellow strands on their black beret. The Mafia wear a long black gown with hood. Symbolists would research into the significance of the colors – black, read, yellow and blue.

How do these reflect self-perception and activities of the cults? The emphasis here is mainly on the matter of identity. They manifest symbols of identity which is underscored with new coded language. Secret cults are very creative in coining terminologies. Some are used by all cultists while many are peculiar. The Classical groups have a more elaborate coded language structure. Each struggles to use coded language to maintain a canopy of secrecy, a shared enclosure which is warm, restrictive and bonding. Instead of providing a glossary, the effort here is to weave the terminology into the narrative discourse.

The single quality is that the terms are poignant and descriptive. Some are derivative; for instance “to sing” is group or divulge information. The Mafia world coined this. Obscenity abounds because relation is of the matrix, wool and weft. Language is shared symbols of meaning and a sign of belonging. It breads familiarity, companionship and trust. Identity is further cultured with non-verbal language such as handshake.

The Buccaneers shake hands by clawing each other on central nerve of the wrist, with one finger. The Pyrates do the same with four fingers. Others parody Black American’s Black Panthers’ style. Each group invents rituals which embody the group’s effort to weave members into a solidarity with deep religious moorings.

The leave of religious practice varies.

The Classical group deny any religious involvement beyond the liturgy at initiation and meetings. Others, however, allege that individuals could join. Some of the Emergent types and Newbreeds tend towards allegiance and patronage of shrines because of the danger of living a violent ethics. The extensive resort to traditional religion is, indeed, a strategy for encapsulation.

It at once breeds fear among members, and panders a sense of security, protection and bond of unity. It informs the theory of obligation. Organisational structure is the architecture of power. It is basically power-arrangement and legitimation, the berthing of authority precisely because authority is legitimized power. Power itself is neutral and only perceived through its activity, something akin to relationship between air and wind. Wind is air-in-motion.

So, the only legitimate questions of power are who holds power, for whom and to what end? Who holds power in the secret cults and for whom? What is the concept of power and authority among them? I think the secret of sporting cult members like Illuminati, and co is through their identity.

In my next article power will be looked into, how power is weaved in the fabric of cults, I suggest you subscribe now because it may be posted and tagged as NTBB!