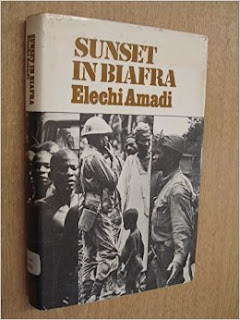 About the AuthorElechi Amadi, who hails from Rivers State of Nigeria has written about 3 novels, an imaginative account of his involvement in the civil war and a short play. These include The Concubine, The Great Ponds, Sunset in Biafra, The Slave and Isiburu (a short play). His novels are normally set in the Riverine areas of the Eastern Nigeria. Sunset in Biafra, his third work is a personal diary which depicts his experiences and role during the Nigerian Civil War. Amadi a graduate of Mathematics and Physics from the University of Ibadan was in the Nigerian Army.He progressed to the position of captain and because he did not wish to make the Military his life career, he disengaged as an army officer. Soon after his exit from the army, the political crisis and the almost intolerable moral state of the nation resulted first in an imposition of a state of emergency in the West, then a Military Coup d’etat. This coup, first in the series, either by design or accident, spared great politicians and statesmen from one part of the country – The East. Reacting to this the Northern populace attacked the Igbo Easterners in their midst. Somehow, the new Military regime headed by Major General Aguyi Ironsi sought to straghten things and it appeared as if an understanding would be reached, but there was a counter coup d’etat.Majority of the Easterners, especially the predominant Igbo tribe agitated for justice or secession. In July 1967, the Military Governor of the then Eastern Region Lt. Col Ojukwu declared the Region the Independent State of Biafra. The Federal Government of Nigeria was bent on crushing the new Republic. But this would take 30 months of hostilities.In Sunset in Biafra Elech Amadi gives his readers his personal views of the major and remote causes of the wLabelsar. These, to him, were generally rooted in tribal/ethnic consciouness and the need to protect and preserve one’s own people. The immediate major causes, include the one sided assassination of politichans and statesmen from the North in a coup that was led by Easterners, the reaction of Northern citizens in a brutal massacre of the Easterners in thousands, the consideration of the acts of murder as genocide by Col Ojukwu and his subsequent secession. This led to the war aimed at bringing back the East into the Federation and her resistance. Amadi writes on the war itself and its effects on him first as a suspect in the Eastern enclave, and then as an individual citizen from a minority tribe in Nigeria.